With Apologies to Woolnough the 2020 binding Challenge

With Apologies to Woolnough the 2020 binding Challenge

Just before the pandemic broke we announced the  challenge. Following the passing of John Willis, long time editor of the Guild Newsletter, it was decided to name the challenge  The John Willis Annual Binding Challenge. and so 2020 was the first challenge with this name.

Just 8 copies of the book were available  5 bound copies entered for examination at our meeting in November 2020. Shown in no particular order. 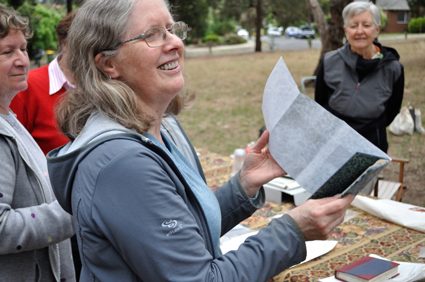 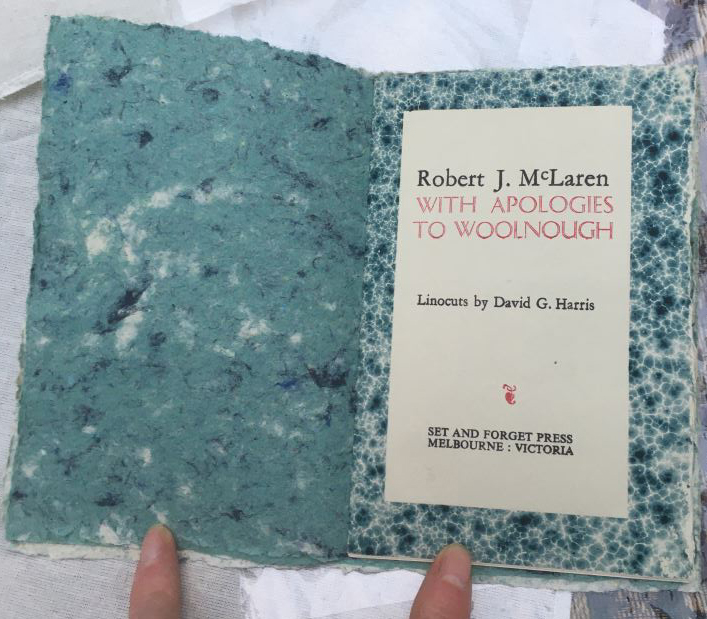 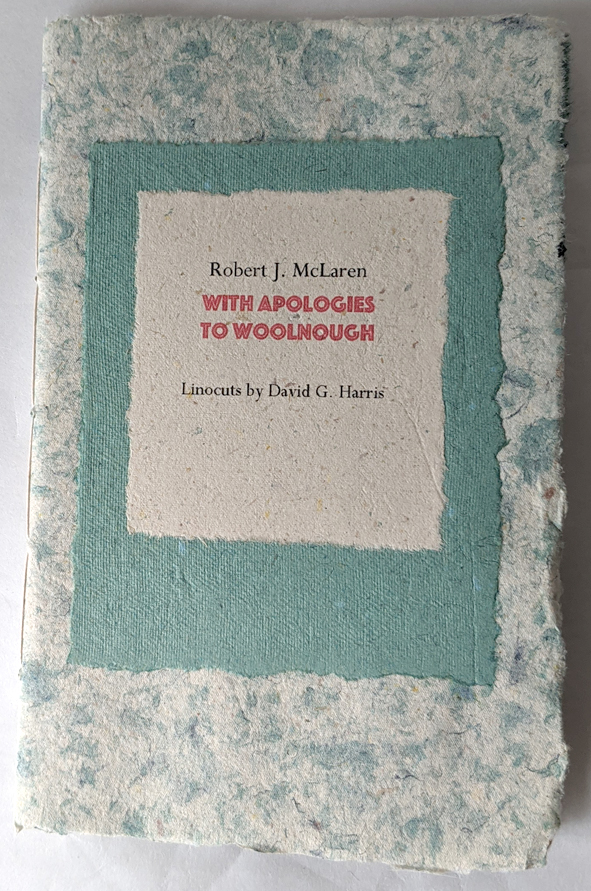 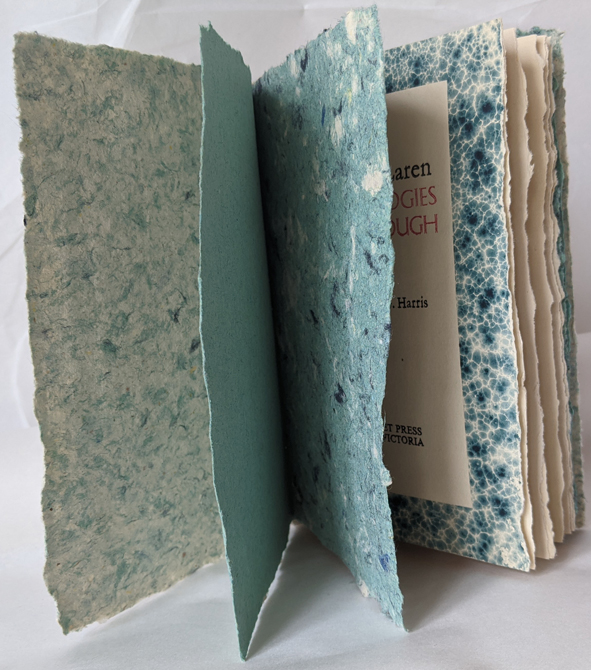 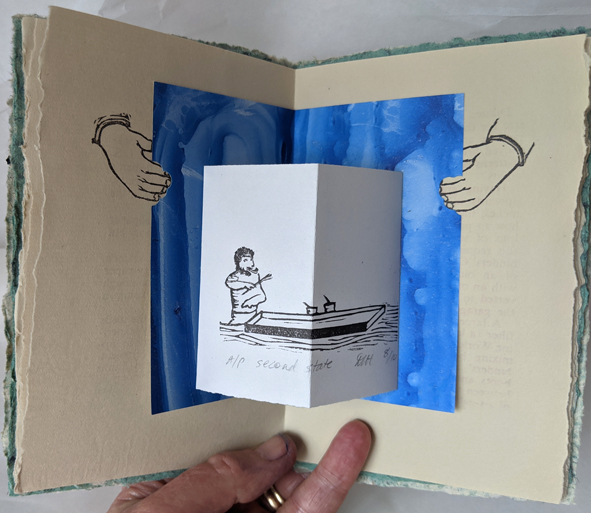 Handmade  paper covers. Gail produced and coloured the paper, the main cover being textured finish. The on-laid piece was coloured to present a frame with a neutral coloured center. The title was inkjet printed on the center.    The paper edges were torn to maintain deckle finish. The text block was wrapped with two hand coloured sheets of matching handmade paper. The text block was stitched into place before the sample marbled piece was inserted. The Linocut was then inserted to the center  to make a pop out  fold. 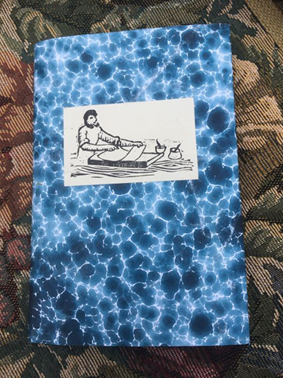 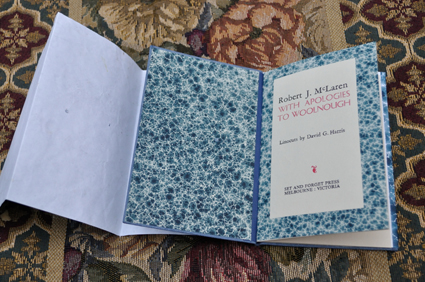 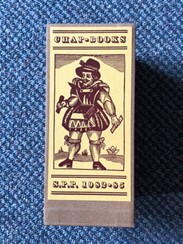 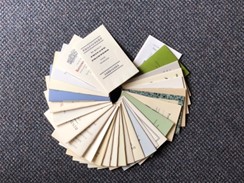 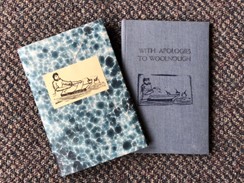 With Apologies to Woolnough was put up for consideration as an opportunity for Guild members to practice various pamphlet binding styles. As the subject of the text is paper marbling I reckoned it could thematically follow the February meeting, which has established itself as an opportunity for anyone inclined to have a go at the mysterious art.

A sixteen page chapbook is not an obvious candidate for a binding challenge — my suggestion was the 1964 novel My Brother Jack by George Johnston. Then the novel corona went viral, meetings went Zoom and the President’s pick got the tick.

Produced as part of a boxed set of twenty-eight chapbooks ‘on a bookish theme’, Apologies ... was a collaborative effort by Robert (Bob) McLaren and myself in 1983/4. Surplus uncollated sheets and tip-ins were finally sorted and made up into sets last year. The Guild bought a batch and a handful of members were up for the challenge.

My initial plan was to use a throw back guard and possibly adding extra sheets to bulk out the slim volume. This approach is described in Thomas Harrison’s Fragments of Bookbinding Technique. The Guild Library has a couple of copies one of which I bound and donated several years ago.

In the end a simpler approach prevailed. Rejecting cover design possibilities of a wheelbarrow — too disrespectful to the advances that Bob has made since early backyard experiments; or an old gas laundry copper — too esoteric, even though it is the object that began our friendship. With the surplus sheets and Lino blocks I re-discovered an unfinished cut. The author sprinkling colours on a regular tank.

In our ‘monograph’ we wanted to feature New Wave Designs which require a longer tank to drag the pattern through.  A new block was used in the printed book. By leaving a border on the cut it works as a titling piece. Printed direct onto the reverse side of Oxford Buckram (suggestive of a bookbinder’s cloth apron) and cased-in, it has been given a long dust wrapper, six times the width of the textblock.

Utilising a trial sheet of “Turkish” pattern paper, I accept any criticism that it is a little creased. The wrapper is not titled, as such. An extra print of the opening image indicates right way up. 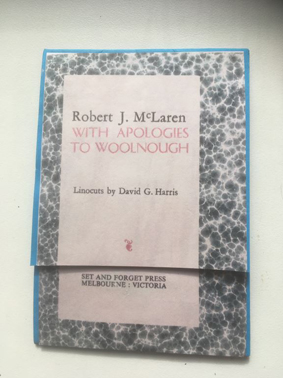 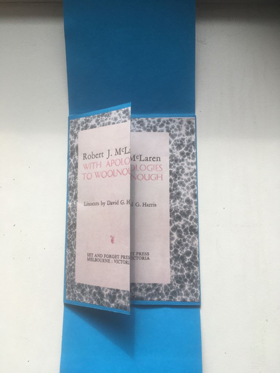 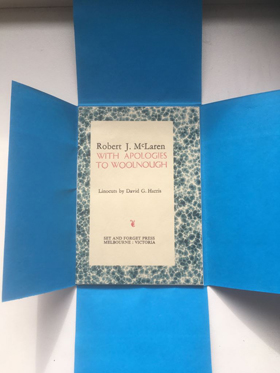 Lots of time had been put into publishing the pamphlet. It warranted careful binding. I puzzled for ages as to how to bind it. It is only thin, so a thick cover wasn’t appropriate. There are several pamphlet binding styles, some I’m keen to try, but none seemed right for this pamphlet. How would I decorate the cover? It is on marbling, so I had a rummage in my limited collection of marbled paper. All shouted too bright or too bold or wrong colour to be used. It sat on my work bench for weeks as I sort inspiration. Its vulnerability on my work bench inspired me to explore protective cases, rather than binding methods. A piece of card folded nicely to protect the pamphlet. I sewed the pamphlet together with red linen and attached the marble sample which nicely hid the thread in the centre of the section. Wanting to title the enclosure, I copied pamphlet cover. Puzzling as to where to paste it on the enclosure, I decided to make this a design feature. So opening the enclosure became a journey of exploration through multiple copies of the title page and the pamphlet was protected within. Mary Russell. 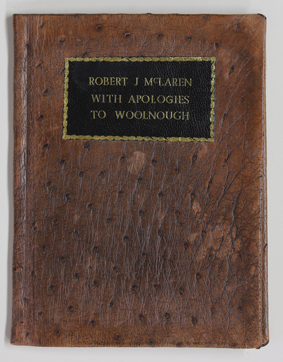 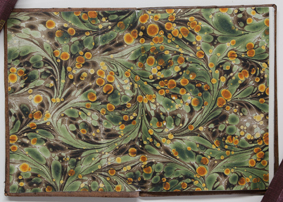 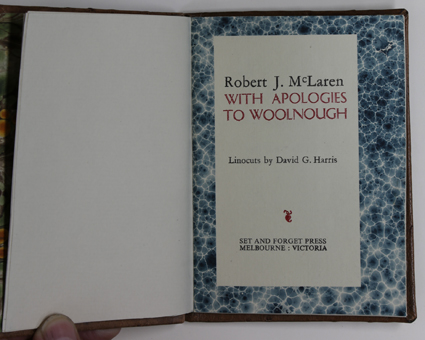 I did two copies. The binding was difficult in that it was very thin. I chose to use a rope stub for the single section. The chapbook was wrapped in 3 extra folios of laid paper, and a strip of linen stitched in with the stitching to the stub.   The cover was bound in Ostrich leg skin, which was hand dyed and polished with neutral shoe polish. This was fixed to the  1mm boards. The endpapers were hand marbled paper from the Gresford collection of papers I bought back in 2006. From cover was labelled using  12 point Edinburgh Font with gold foil in the  blocker, and the edges gold foil trimmed with a hand pallet.  The  ostrich leg leather shrank and as the available width was  only small,  I was unable to release the stress  without pressing  pressing leather back onto the boards. This resulted in some loss of the texture of the leg leather. 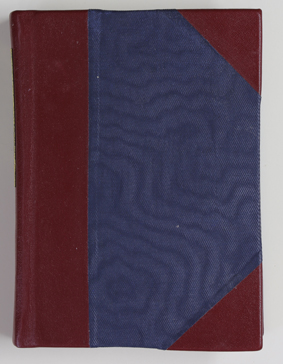 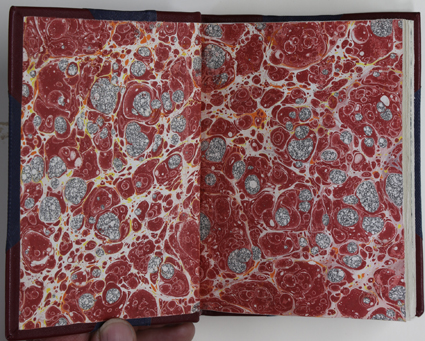 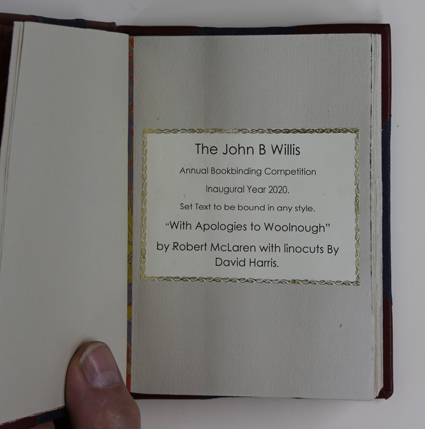 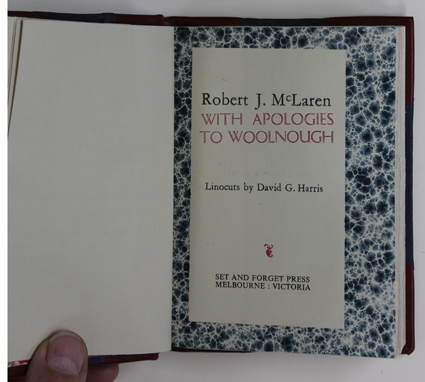 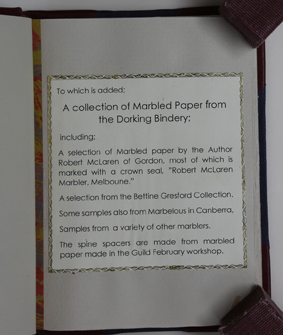 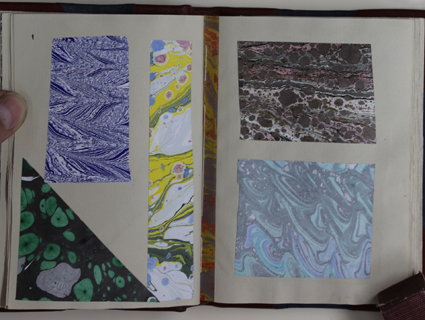 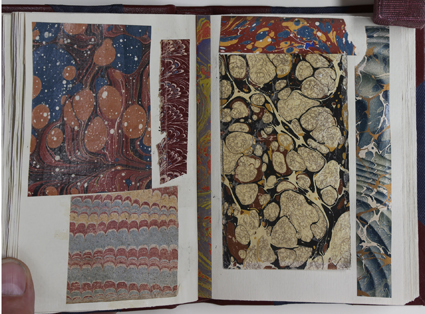 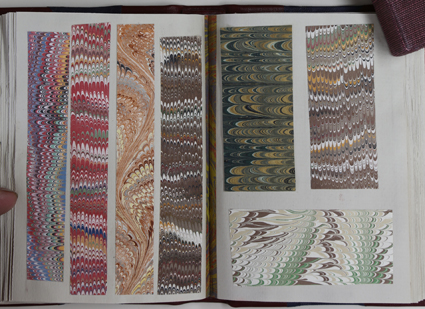 The second was a departure from just the chapbook. As I have a large collection of marbled offcuts going back to the 1800’s I decided I would use the opportunity of the chapbook on marbling and make it a reference of all the offcuts of marbled paper that I have used, plus the archive of old papers and remains of papers used by Bettine Gresford in her bindery, along with samples from Robert Mclaren, and other Australian and international marblers. I allowed extra blank pages so that I could add further samples as I used different papers in current and future work.

I wrapped the chapbook in 3 extra sheets of laid paper, then added 9 sections of 3 folios, to make a total of 10 sections. I used hand made marbled (2019 Feb marbling workshop) and guarded each of the folios inside and out to allow space for the samples of marbled paper to be added.

The endpapers were made with a Cockerel hand marbled paper and the endpapers stitched into the block.  Pared matching red roo leather used for the headbands. Spine lined with linen to provide the board hinge.

The book  was covered with half kangaroo red leather and a moiré pattern cloth  infill.

Some descriptive labels were attached to the relevant pages.  For more pics see the website.

What would I do differently? If I did it again I would paste in the samples of marbled paper onto each folio and press each folio before folding  and  stitching, to remove the inevitable wrinkles. I would also line the outside of the boards so the overlap of the cloth and the leather on the corners would not show.

However I was delighted with the process and the generation of an historical archive, that I hope will inspire someone else when I am promoted to another place. I have also started a companion volume of the tools of the Bindery, along with tool makers, previous users,  and the raison d'être for the tools. I might add that to the website once finished.  Jim Finger