A Review of Feathered World repairs.

A Review of Feathered World repairs.

Rebound Leather on left many others rebacked or rehinged ready for the end user.

Feathered World Newspaper was commenced by Alexander  Comyns in July 1889. Alexander had been the editor of “Poultry” up until June 1889 at which time  commenced the “Featherered World “ weekly newspaper. This was intended to service all the “feathered friends” wild and in captivity.  Hen Fever was few decades earlier, and the popularity of keeping poultry had spread from just the dunghill mongrel, and the cockfighting bird to include  the rarity of the exotic breeds being discovered around the world,  and it became a desirable thing to have these breeds, and the new breeds developed from them. The first weekly  issue Vol 1 Number 1 was July 5, 1889. the frontis below. 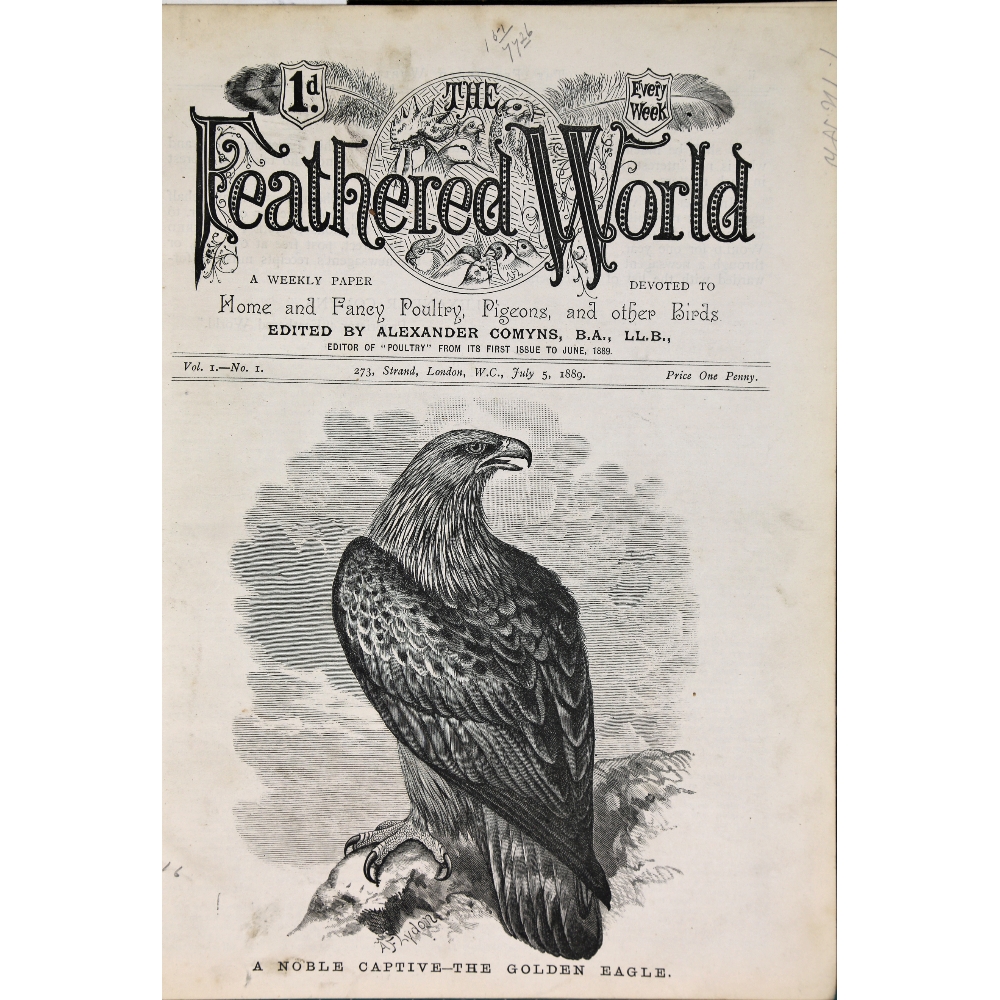 Alexander continued as the owner and editor until Volume 4 cover sheet Jan to June 1891 lists Mrs Alexander Comyns as Proprietor, and Alexander as editor. Then in Vol 5  number 117 of Sept 25 1891 Mrs Alex Comyns becomes the editor. One presumes that Alex died however there is no mention in the paper of him doing so. If you have material to add to this please contact me. Later Mrs Ethel Comyns, married Mr Lewer  no date recorded I can find.

Mrs Alex Comyns continued the  newspaper uninterrupted with a wide editorial team until about 1930 but I don’t yet have the details. The weekly issues grew, from just a few pages to a substantial and broadly read newspapers. I have no circulation information, maybe those reading this will have material to add, and I welcome comments and information which can be added to this material. 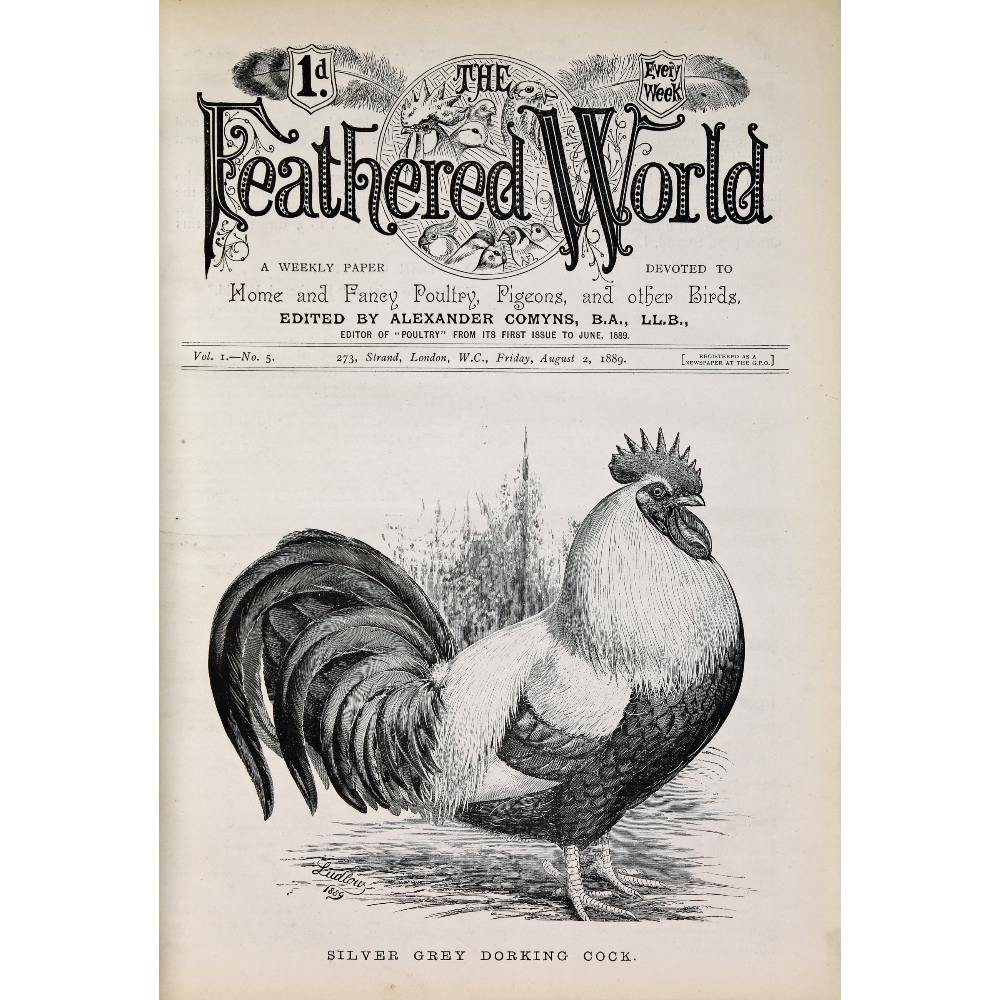 This particular set was both a pleasure and a disappointment.  Like many major works, it  became an archive that wasn’t referred to very often because of its magnitude. I always intended to reprint many of the good articles in them, but alas time caches up. So this set is destines  to a researcher who will mine it for articles in his interest sphere. The set consists of 37 volumes  commencing with the first issue July5 1889. The first volume was 20mm shorter than the rest of its publication life. The volumes were bound as follows. Volume 1,  3, 4, 5, and 8 were half bound  leather on cords, with marbled sides. These are curious as I think they were from a different set, and that set has the  inscription Mr H W,  Mr H Weir, and Mr Hill Weir on the top corner of most issues. I suspect these annotations were from the newsagent who put them aside for the customer. I have not any way of verifying if this is in fact Mr Harrison William Weir whose illustrations appear particularly in the early  issues?  I anyone had information about H.W. and if he had a nickname of Hill I would appreciate knowing about it.  H.W was of course famous in poultry circles  for his Our Poultry and all about them (1903) and as Illustrator in Tegetmeiers The Poultry Book (1867) and later in The Poultry Book with a number of other editors (1912).

The rest of the set is  32 volumes in Red printed FW covers, supplied by FW for complete sets. They were all labeled with a taped on paper label with a sequential number , 1-36 with the last volume numbered on the spine  as decimal 72.  As I usually only took a random volume off the shelf to browse, I did not check the Roman numerals underneath. It was only when I collated to copy for sale did I notice that  the label 17 was in fact Volume 18 in Roman numerals. The set was not 36 sequential volumes at all!  Indeed 2 volumes are identical but with different spine labels. In addition volume 72 has no spine label, and the embossed ninformation says Vol 72 in decimals with no Roman numerals, so likely this was a compilation of sets grown over time. Interestingly the bound newspapers were top edge Gilt except for the leather issues, and the binding style makes me think ( I could be wrong) that the volumes were all bound in the one bindery.

As for construction, the set is very interesting and shows in part the changing  of the times. The major part of the leather bound  volumes is a very good quality paper. I read in a book once a famous rare book collector loved the music of the paper. Every paper makes a noise as the pages are turned, and changes in the noise indicate changes in the paper. In rare books this is important as a page may have been replaced if lost and when the book may be worth  thousands or tens of thousands, or even more, then the temptation to carefully “repair” a volume  with parts from another damaged volume, or a forgery, to make it “ complete”  is very strong.

This is a much lower  priced set of volumes, so  it is unlikely that such a forgery would occur.  Newsprint was never meant to last, but in the early volumes the paper was very good, handled well, and made a distinctive noise as handled. But as the production time went on the paper became very inconsistent. Some paper has darkened significantly and become fragile, consistent with the introduction of the mass cheap newsprint. Then there are the issues where there is two different papers .  The qualities are obviously different, and I suspect the change of a supplier, the old paper used up to the end of the stock, and then the new supplier continued on. Then there was the change with the engravings. In the early issues, all the illustrations were engravings. Then a few photos, but with terrible  reproduction, almost like they couldn’t get the press settings right. I did the same many times when learning to print Bellsouth Catalogues  and trying to get photos in them  using the duplicator, and later offset. The introduction to colour printed pages as lift-outs and calendars on stiff paper added an extra level. The issues where there were a lot of photos from about volume 15 onwards  there is often a different paper with the black and white photos compared to the rest of the paper in that issue.

I am collating a list of the coloured plates, only one or two are still in this set. They became collectible in their own right, though I am unable to find if they were tipped into the issue at release. The few remaining present in the volumes are tipped in, which may have been done at binding time.  I think they were all tipped in at release, as there is always a couple of slightly damaged pages in the issues where the colour plates are listed, I suspect from the careful (and at times not so careful) removal of the coloured plates. It would make sense to tip them in to prevent loss or theft at the time of distribution.

Many of the still card “almamacs” which were produced are also added into these volumes and unfortunately the stiffness of the cards puts a lot of pressure on the bindings, so care is needed when handling.

The age of the newsprint and the fragility of it mean there is a page or two in every volume loose, and there are a number of cases where the stitcher has missed a few pages at the centre of an issue as he is sewing up for binding the volumes.  I have chosen to not attempt to resew and in many cases, I have  not  tipped back in the loose pages unless they are of particular importance. Missing an odd page of adds isn’t significant, missing a part of a serial on judging a breed would be significant. Tipping back in pages onto fragile newsprint often causes more damage than was there in the first place.

The changing times are reflected in the adds. In the early volumes the frontis was always a bird engraving. However, as time went on, the big money of the time and the spread of the papers warranted attempts to advertise non poultry items. So the most popular add was soap, full page frontispieces and often full internal pages. The next was chocolate, same on the frontis and sometimes internal. Also I suspect they ran short of good engravings as some of the  engravings have different dates and different prize winners but I am sure is the same engraving rebadged.

In all even a poultry newspaper cannot avoid reflecting the issues of the time.

The paper was divided up into several classes.

The engraved frontispiece usually a bird.

Large advertising, and classified advertising of course paid the major costs of production and distribution.

The Content in several groups attracted the readers. Exhibition reports and results were a major feature with issues set aside to feature such things as the Crystal Palace exhibitions, and the many local show societies and country fairs all get a mention with results, numbers, breeds, and winners. Articles on management, breeding, showing, and  pure breeds. These mainly  feature prominent breeders and writes of the day, often in serials, and by the wide editorial staff of the paper. Correspondence is interesting reading, and in distinction to today’s firey instant internet, tend to have well argued  cases for different  understandings of the issues of the day.  News reports are interesting reading “ Police raid a cockfight in the public house at this village” and they all sound so familiar, including the defences, “ I was only having an ale and the police pushed me into the room where the cockfight was happening”. The letters to the editor, called Correspondence, were again like the internet of today, with “topic threads” running over many issues.  For the historian, this is a gold mine, though like most goldmines, it can be a bit of digging to find the articles of real interest.

Provenance.  This set  came in a large collection from John Palmer in NZ. I had  asked him quite a while ago  about his personal collection, and he sent me a retail catalogue. I explained I meant his “personal” collection, and I got an interesting list these on it.  I told him that  when he was ready I would buy  en bloc. ( the lot!)  A few years ago he  asked if I was still interested, and I said yes. They arrived before we had negotiated a price, let alone paid and money. A true gentleman’s transaction.

In later years, Feathered World commenced a series of yearbooks the first in 1910 with  many of the extra articles  called The  Feathered World Yearbooks. The do not cover the correspondence, show results, advertising, but are an essential reference in their own right, with many new articles.  This started in  Jan 1910 carrying the reports and so on from the previous year with  larger articles on breeds etc than generally appeared in FW newspaper. The yearbooks continued up to at least 1938 ( to be verified). Always looking for more information, and verification that my facts are correct. Regards Jim Finger