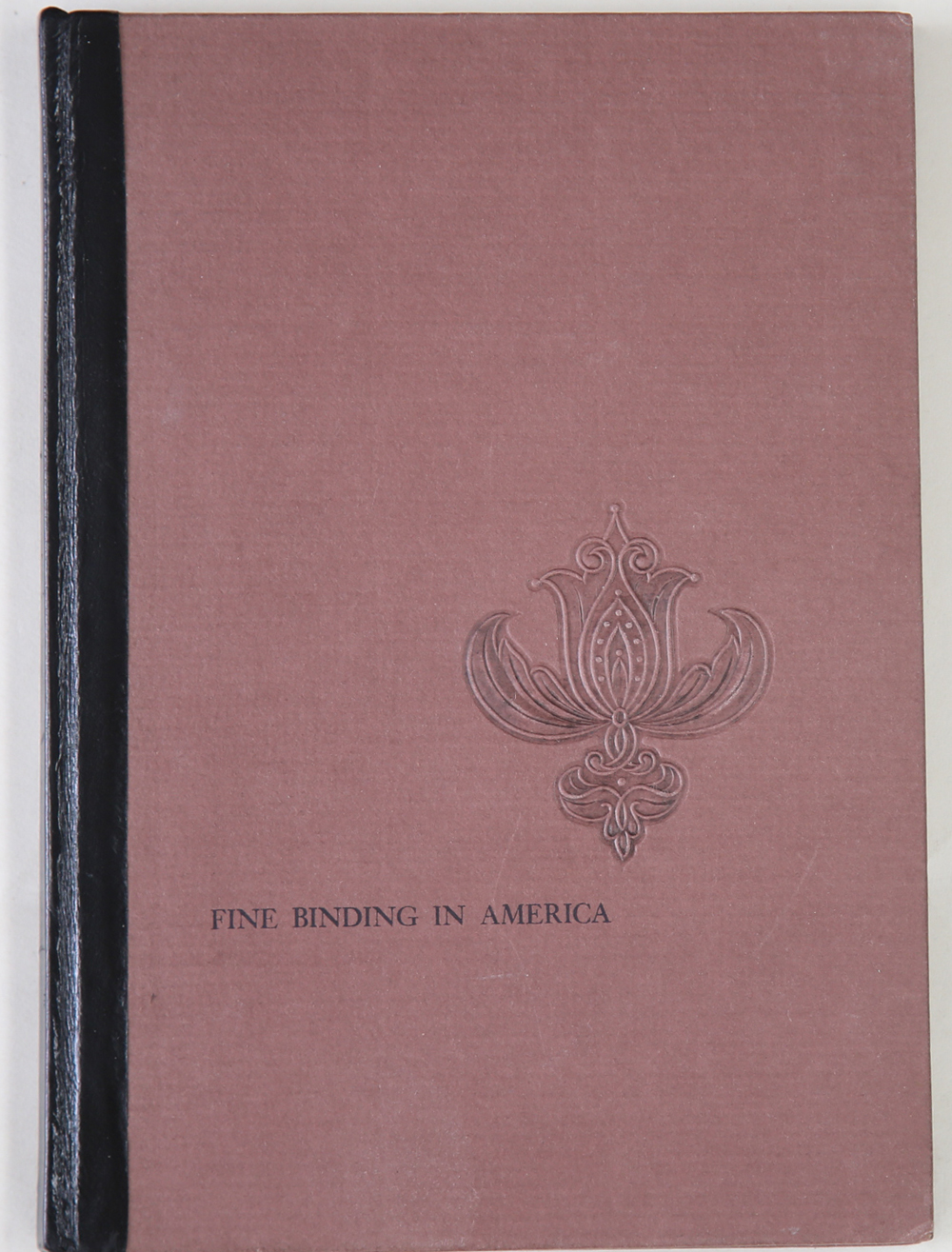 This book is in the Betteridge collection, and it has migrated to the top of the “Reading in Pandemic” pile.

After a while I realized that the Club Bindery was in fact a business not a “club” as we normally understand the term, and far from being Fine binding in America, its really the history of the operations of the Club Bindery. Alas, I will never be part of the “club” who could use its services.

I found this book in the beginning hard going. The writer Elbert Thompson is very well qualified to analyze the subject matter,  and initially I found it very hard to read.  However there is some very interesting analysis of current binding styles and their origins, and some techniques.  I found some succinct explanations of binding styles which has been very useful. (Attached below.) So I guess you could say after a while the reading became a bit easier after I learned his style of writing.

In the preface, Elbert claims the credit for the research and content, and “The Junior Author’s contributions have been confined principally to the matters of organization and style”.  When I reread this, it explained my difficulty with the book. The design is a mess and I think Elbert knew! And the design distracts from the reading of the content. And as a content man I want to understand what he has to say without the design distracting away from the understanding.

The first page after the EP is a semitransparent leaf  with a picture of a fine binding heavily  gold tooled, printed in purple ink. The reverse is blank, then next page front , Beta Phi Mu Chapbook  Number Two. The reverse has Title Fine Binding in black, then Author in purple.  Then what I expect looks like the cover,  a dark stiff sheet with “the story of the CLUB BINDERY” on the front and copyright details  on the reverse. This marks the start of the book proper. From there the content is a random configurations of column and colour of type, odd blank spaces, variable widths of columns, and oversize page numbers in odd places.

The last few pages are good glossy black and white prints of various fine bindings. At least it made the finish readable.

The design makes the book hard to read due to the distraction of the layout, and for the most part this un-illustrated book is intended to be read, and the concept of beauty may appeal to John Lennon or the sixties art movement of randomness. But the text content is far from random and includes some content worthy of study. It is style makes it very hard to study. When we produce our next Occasional Publication, I hope it will not follow the rules of design used here, though I struggle to find any.

I suspect the book was produced in sheets for members to bind and perhaps there were some done in fine bindings.  This binding has an amateur feel (as one amateur feels entitled to say to another).

As always the sentiments expressed here are mine, and I take responsibility for them.  They do not necessarily represent the views of the VGB.  Jim Finger

Fine Binding In America by Albert and Lawrence Thompson  1956  edited for colour format and type style for the web.

To repair or restore.  Page 10

After all that can be said in favor of retaining books in their original covers, there are very many which for their preservation demand rebinding, even as old rags should give place to proper clothing. Every collector, if he takes a just view of the matter, cannot do otherwise than consider himself as their temporary custodian, and wish to transmit them to his successors if possible in better condition than when he acquired them. Perhaps some critics may still cavil at what they consider a too lavish expenditure, and still vaunt the superiority of the "original cover." If these are good, any renewal of them is unnecessary, but as all books must have bindings, it is surely better to have them well done and even elaborately decorated, no matter when their covers may be placed upon them. The better they are, the better the chance of the survival of the volumes, and the best will wear out soon enough.

The Gold tooling Method of Leon Maillard.  PP 24-26 A stimulating and challenging discussion especially for a learner in blind and gold.

Leon Maillard and the other finishers could do their best work with a cushion of leather that would allow deep tool impressions, sinking well into the surface of the skin.

Leon Maillard was widely acknowledged as the best finisher of his day. His tooling was solid, deep and lustrous as molten gold. He obtained this striking and inimitable effect by the repeated application of the warm engraving tools to the impressions of the pattern until he had actually burnished the refined gold filaments of the tool's design. Holmes has said that he never knew another finisher who could exe­cute this exceptionally difficult feat. Certainly no finisher trained in the Anglo-American style of flat tooling in single impressions would even attempt to practice the method followed by Maillard.

Holmes has provided a detailed account of Maillard's methods:

Leon Maillard's procedure was something in this order: First he would impress the tools upon a sheet of paper the size of the cover to be finished. Then he laid the tooled paper upon the cover and tipped the paper down at the corners with paste.   The tools were then applied to their previous prints upon the paper and impressed sufficiently to leave their imprints in the cover leather. The paper was then re­moved and the tools reapplied to sharpen and deepen their impres­sions in the leather cover. The design at this point was already tooled in blind upon the cover. If the design, or parts of it, were in­tended to be left in blind, Leon Maillard would not be satisfied. He would moisten die leather with a damp sponge and retool the im­pressions to sharpen and deepen them still more. If the design was intended for gilding, then he would trace the lines with white of egg glair, using a camel hair pencil or fine brush. He would oil the leather very slightly with a pad of cotton, then lay on his gold leaf two layers at a time. A single layer would break along the lines of the tool impressions. He would lay on four or six layers of gold leaf until the tool impressions were completely lined in every tiny sur­face. The tools were heated to a little less than that of a laundering iron (Cobden-Sanderson said one should be able to touch the tool) and were then applied to the im­pressions.

Leon Maillard would rock the tool gently and firmly until every part had been fully im­pressed and the gilt design thor­oughly burnished. To facilitate this gentle and firm rocking or rolling motion, his tools were cut with a slightly spherical surface. This slightly spherical surface of finishing tools probably was in more or less common use in Paris, although it was unknown in England and in the United States at that rime. By repeated impressions of his tools Leon Maillard obtained a brilliance that was unrivalled.

Leon Maillard would burnish the surface of his tools before use. A tool with a dull surface cannot leave a high burnished impression.

Although this great craftsman could imitate any of the classical designs used in the various styles of book cover decoration down through the centuries, usually far better than the original masters, he had no char­acteristic style of his own. The intensity with which he worked on the tooling of a design made him quite temperamental, and he insisted on working entirely alone. When the bindery moved to its Thirty-Second Street location, Maillard had his own room with two outside windows. The windows and the door were kept shut while he was at his bench.

Some Pics of Fine Binding In America showing the style changes.

Please make allowances for the pages moving while the photos were takes. The type is correct in columns on the page, jus funny angles when the pages moved. But enough to see the variable layout. 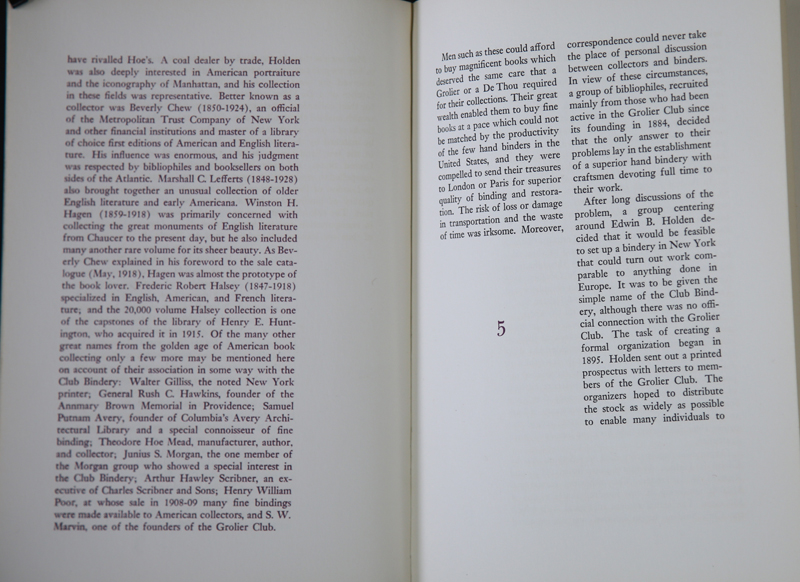 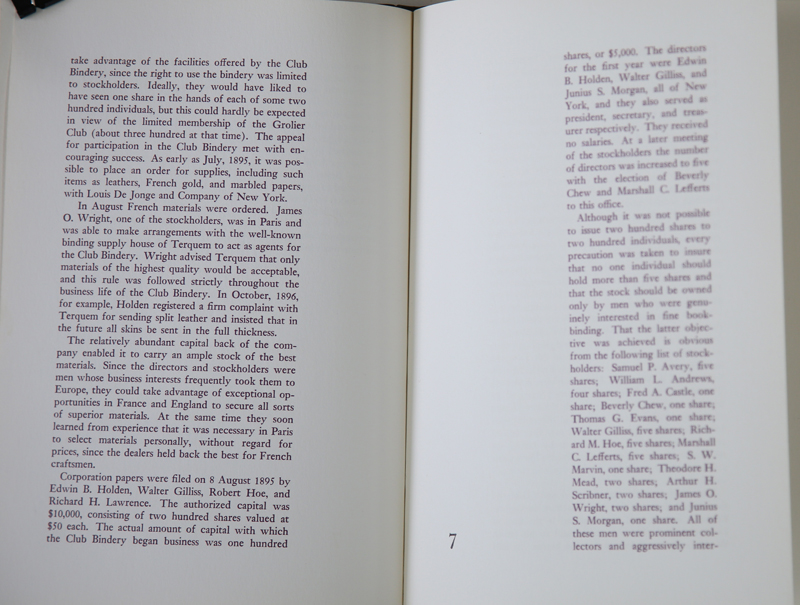 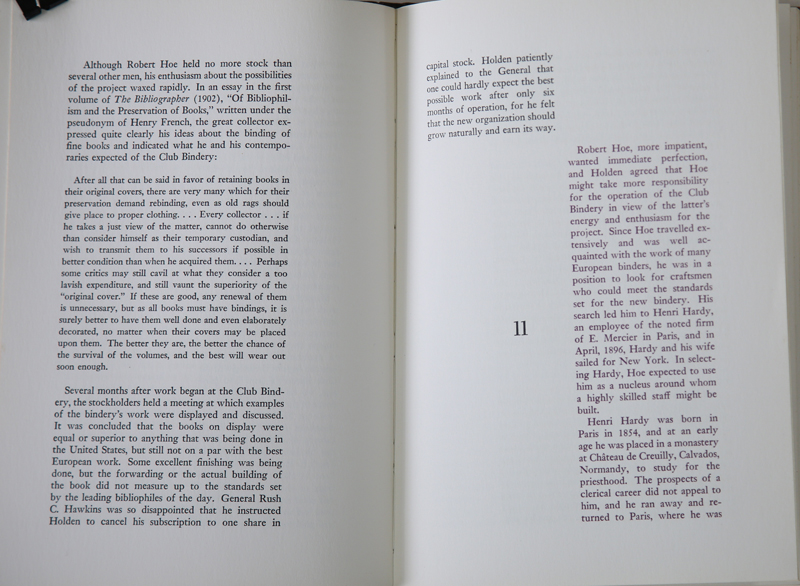 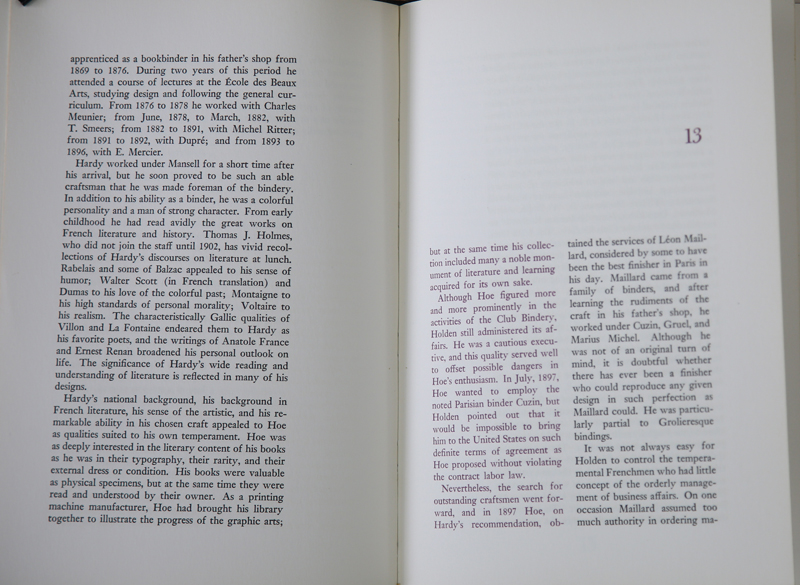 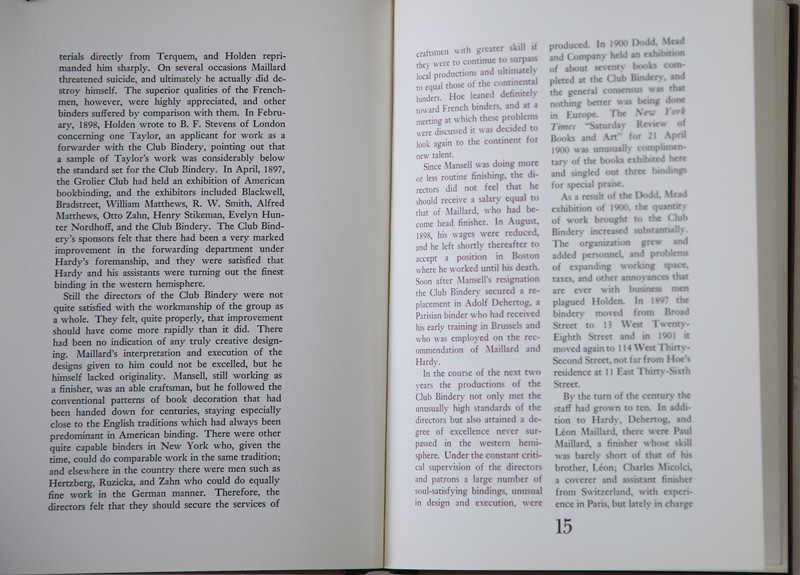 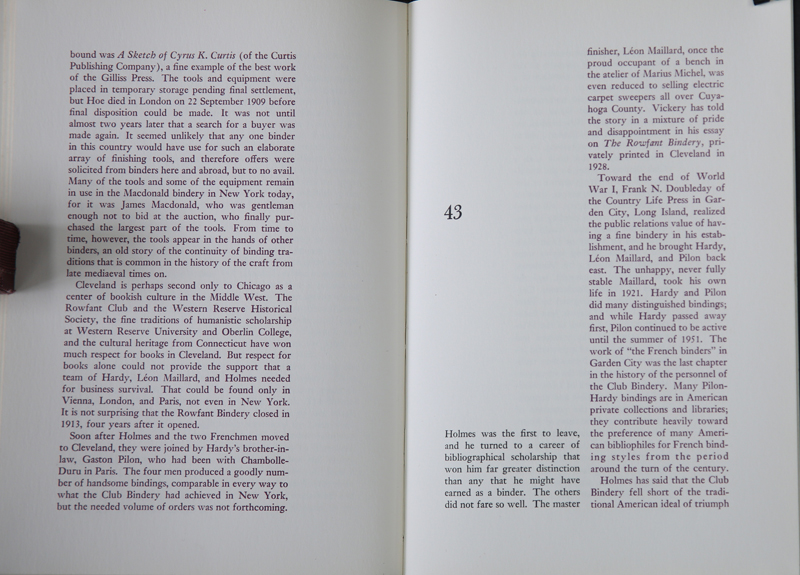