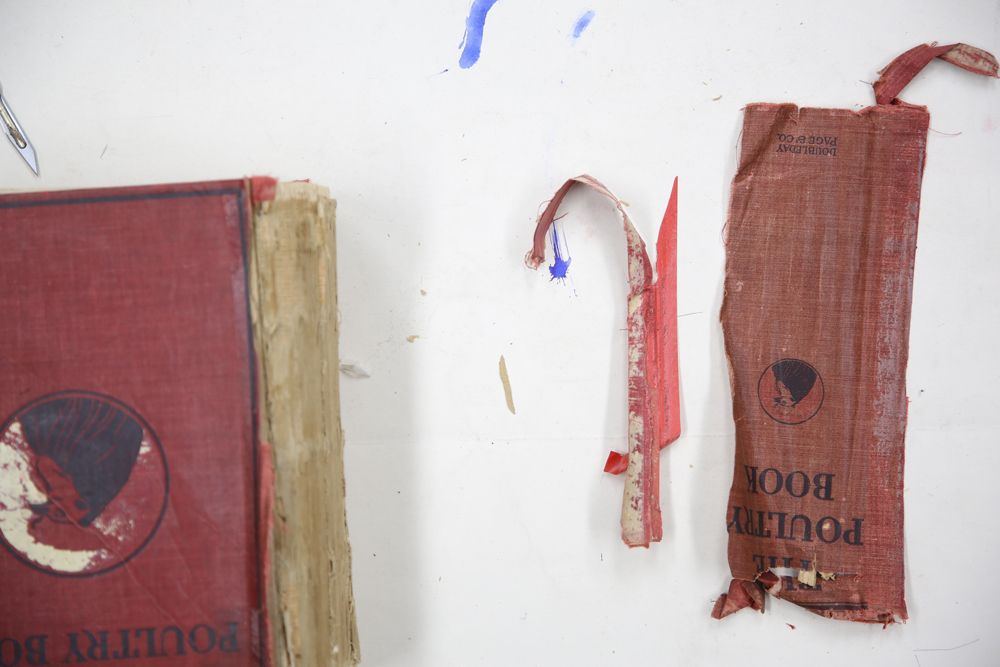 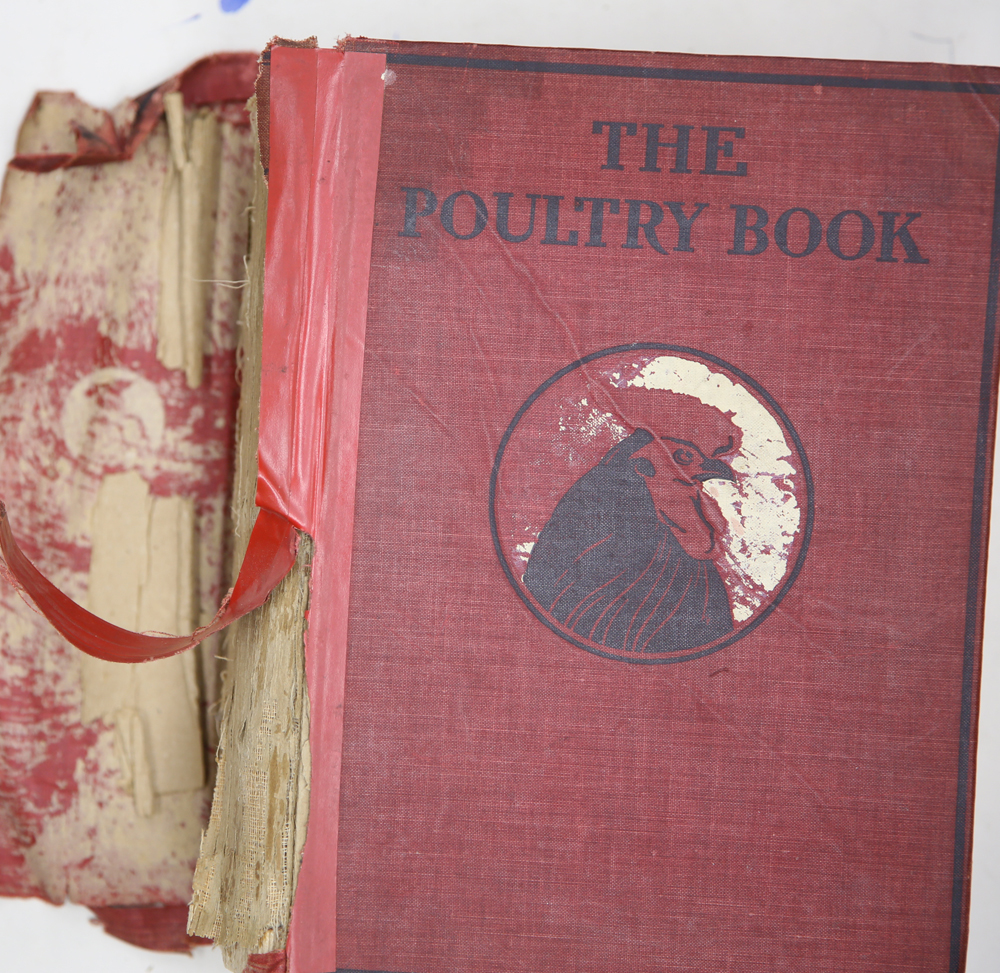 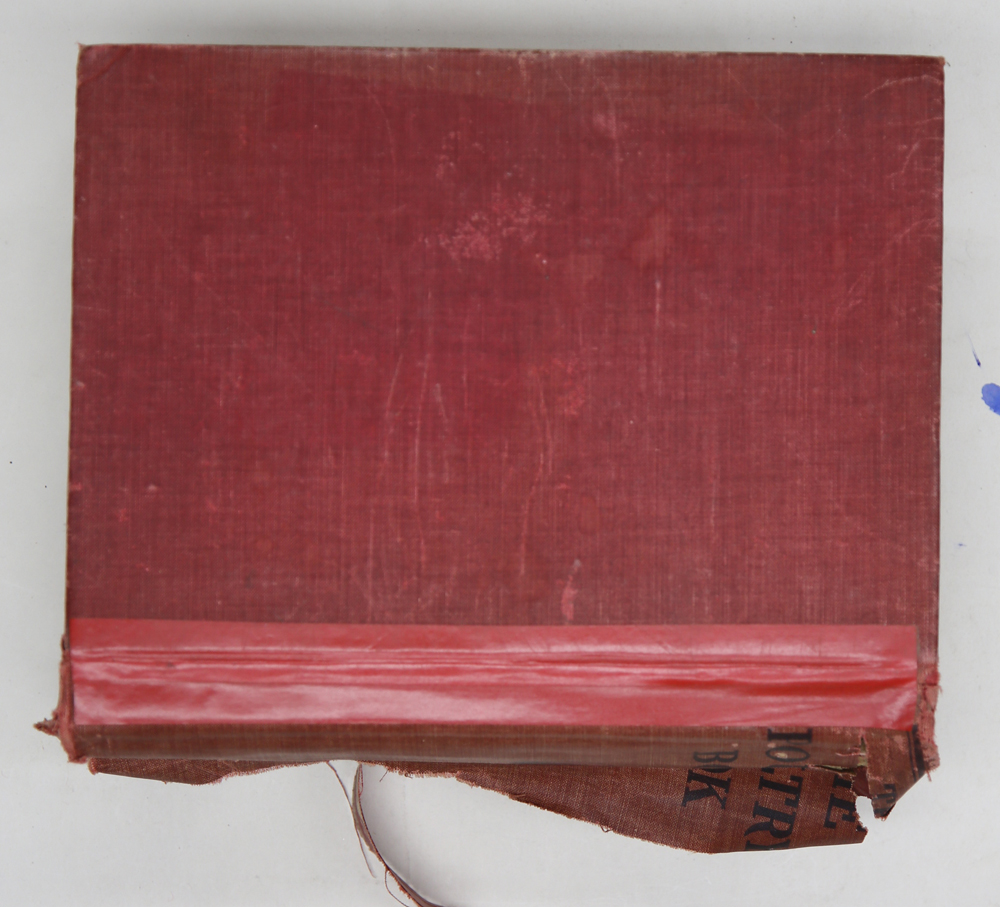 1/ I start dismantling the book with an initial plan to repair all the faults in the book block, and decide on the boards and cover issues later.

a/ Remove cloth spine cover, there is no spine lining attached to the worn cloth. Remove the tape on the old joints.

b/ Remove all the tape from the front and rear joints.( above)

c/ Carefully remove the boards without damaging the folds of the paper page sections. 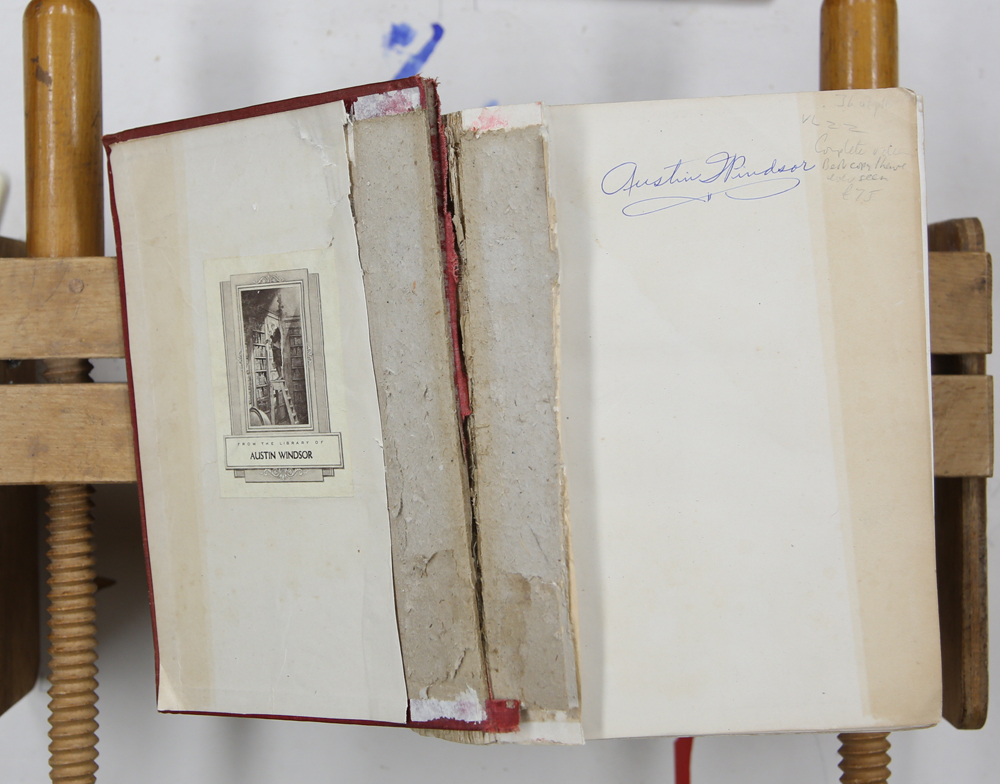 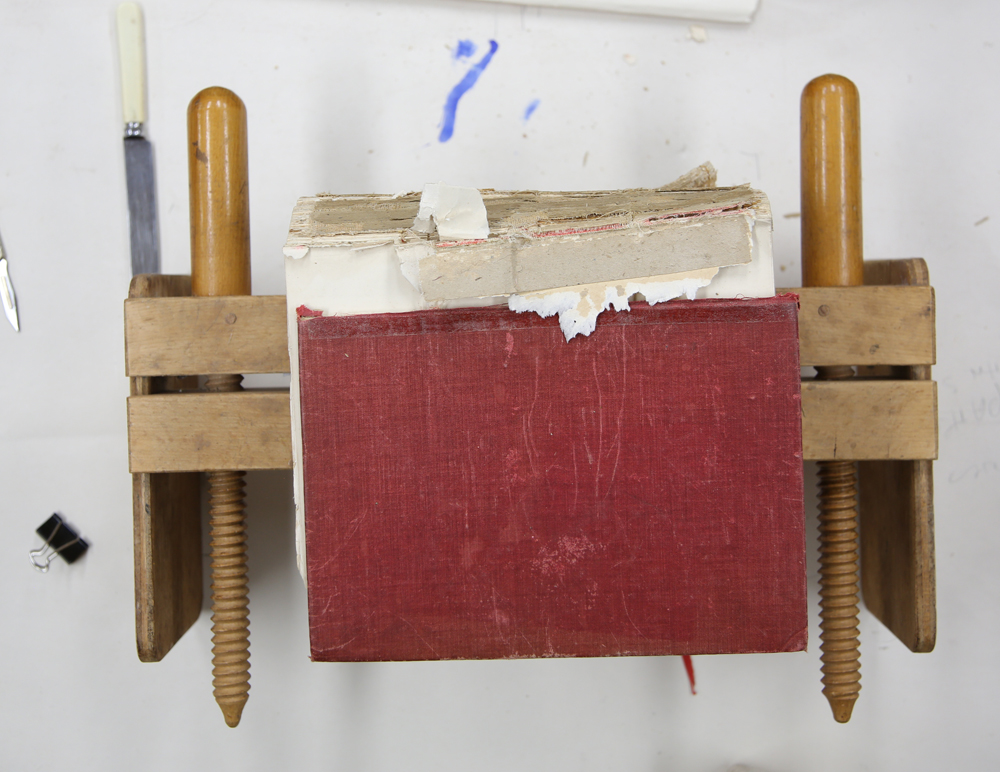 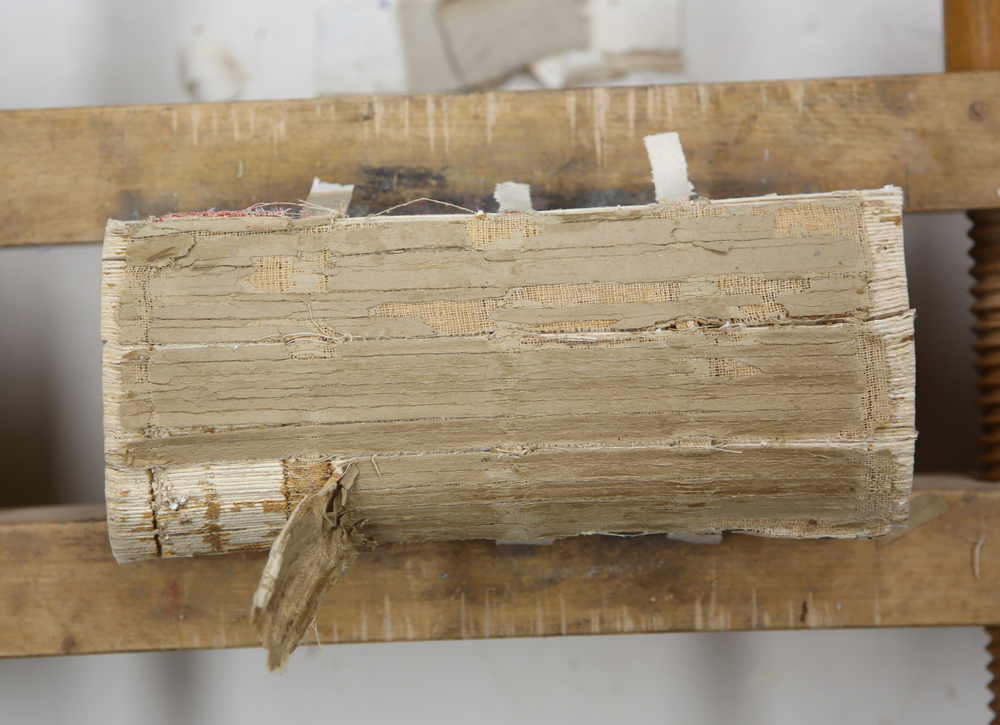 d/ Using thick paste soften the glue of the spine. This book is of the vintage of the animal glue on the spine, and removal involves softening the glue with wheat paste leaving it for a little while, and the pealing away the old glue and end linings that remain. 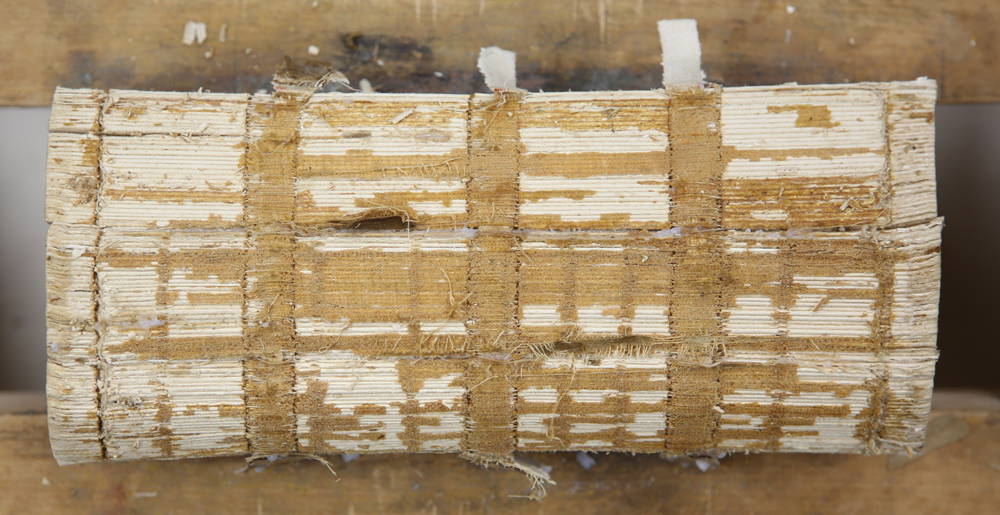 e/ Cut all the threads that hold the folded page sections onto the tapes. Remove the tapes and carefully  separate each section, removing the reinforcements that have been added in an earlier repair. As it turns out the were pasted in place and a very gentle use of a kitchen knife and some tweezers allowed removal with almost no paper loss.

f/ Dismantle the spine, lifting each section open at its centre to expose the thread  and cut the thread removing the section. Ensure all pieces of old thread are removed. Measure a piece of thread thickness so a similar thread can be used  in the repair.

G/  Stack up the sections ensuring that no moisture in the end of one section is left sitting in the middle of the  sections.

The faults of the book.

I will as best I am able describe now the faults of the books.

2/ The book separates at each of the sub sections. These have separated because of two faults. One, the books were not opened properly. A new book must be opened correctly section by section, especially one as big as this. This ensures the stresses trapped in the spine at binding and gently loosened and the books is allows to open gradually. If done correctly the book ( same for any book) will survive many more uses that one casually opened somewhere. This big set has been dropped open at the junctions of each of the book sections. The opening of such a heavy book by simply allowing it to drop open, causes the spine to split at that opening location. In this case the book  has been dropped open at the junction between 1 and 2 and the junction between 2 and 3. An attempt has been made to and cloth joints to cover the obvious cracks, and that simply moves the problem to an adjoining section. In addition the first section of each of the volumes has been oversews to try to create a stronger  joint at these breaks but again it shifted the stress somewhere else,

3/ In addition once the sections were moving separately it put a lot of stress on the thread sewing the sections together. As each part of the book moves away from its neighbour,  the sewing thread has been moving back and forward causing the sewing holes to be enlarged, and the threads have almost worn through the tapes which hold the boards in place.

4/ The boards are covered in red cloth, now very faded, and the corners of the boards very badly damaged under the remains of the cloth sides. To use or not reuse the boards that is the question. I am leaning on the side of replacing with a heavier board. The front cover on the outside is quite wrinkled where the cloth has delaminated from the board, on the inside the end paper was lifted and replaced after another clumsy repair, and is not glued down well but wrinkly. Top front corner very crushed.

Description. The Poultry Book  by Many Expert American Breeders and Harrison Weir FRHS  under the editorship  of Professor  Willis Grant Johnson and George Brown  Published by Doubleday Page and Co 1905, often referred to as the Poultry Book by Weir, Johnson and Brown. I will include the details of the illustrations, colour plates,  pages per division, sections, and sections per division, as I dismantle.

This is the three volumes in one Poultry book Harrison Weirs our poultry American edition with the input of American experts, It was issued in parts and came in several different binding. The best binding was the three volumes bound as 3 separate volumes. The sections were issues at regular intervals, (how often) and when each volume was complete the owner had the choice is use their own binder, to make cases or to but a premade case to add to the sections, with a local binder doing the assembly work.. These was an option at the end to buy a case for all three volumes, a cumbersome solution and a relatively small number were bound in this way. The remaining bindings were often damaged by the pure weight of the book. However today the 3 volume sets are rarer, so there is some pressure to “restore” to look original. To conserve sometimes means put it all in a special storage box with all the bits that may have fallen off, and just keep them, or in the case of a really rare book rebind exactly the same with the same materials, same methods to recreate the original work. For me to restore this book will mean to not do some works which will make the book serviceable. So I am aiming for repairing the book(s) to be readable and so they will remain as one for a long time..

I have been requested to rebuild this book posting the stages online. It began with a other article featuring this book asking if it should be repaired or restored posted both here and on the chickenhistorynow facebook page. So now I will follow up and try to show whats required not to pretty it up but to make a readable  and reasonable tough book.

Its actually easier to do the steps than describe them, which  it does become wordy   I have proceeded to analyze this book prior to binding with a description of the faults, and the reasons why I will do the works on its restore, repair, or conservation. I will post on Chickenhistorynow  and Victorian Bookbinders facebook,  mainly as  pictures with a little commentary, and  Trewalla.com.au and vbg.net.au. with the longer descriptions.  I don't claim to be an expert, just an amateur binder who started binding to work with damaged books which came my way.  Jim

First pics the front,  the book plate,  the spine, the rear. 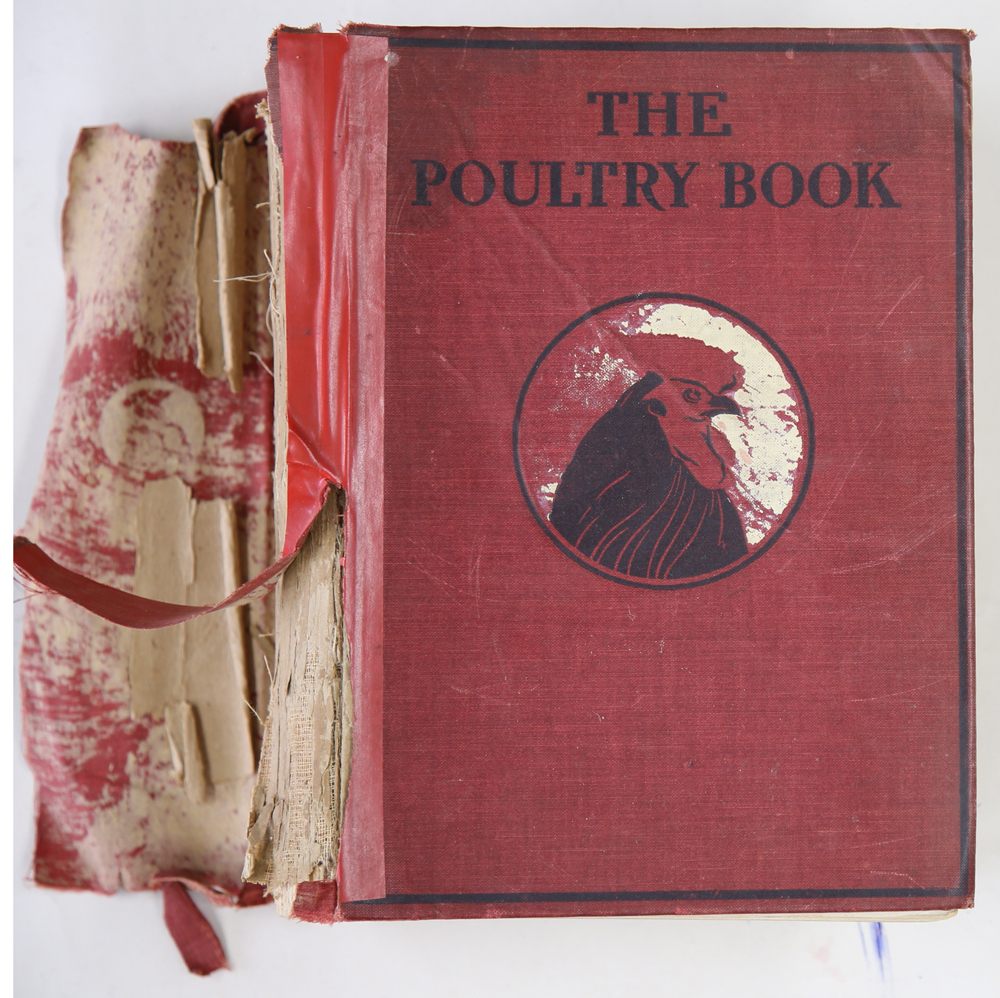 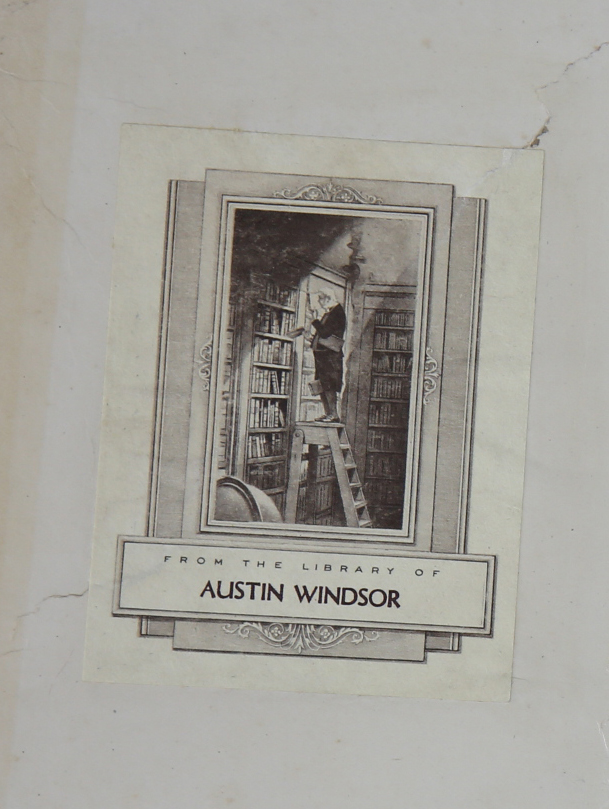 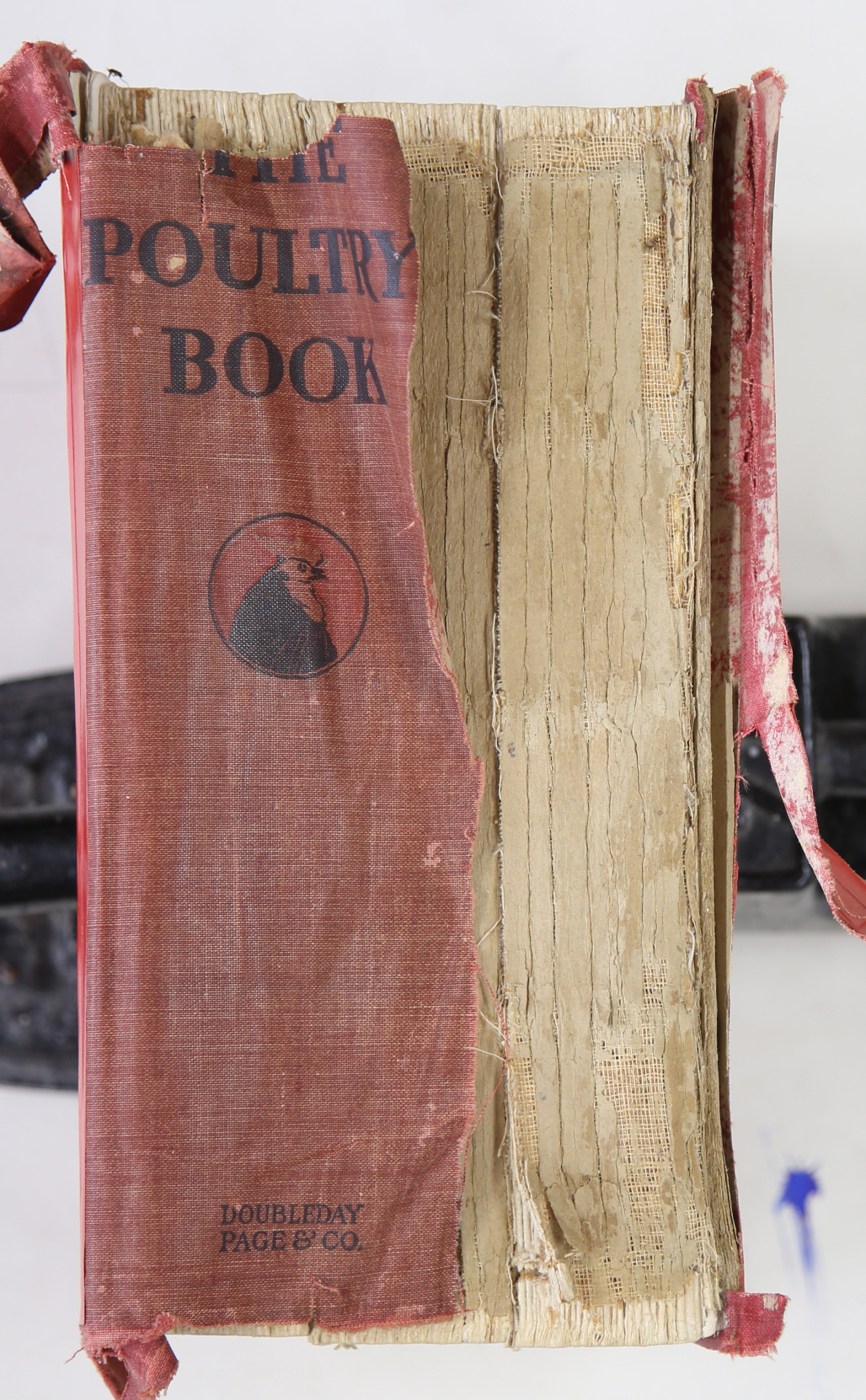 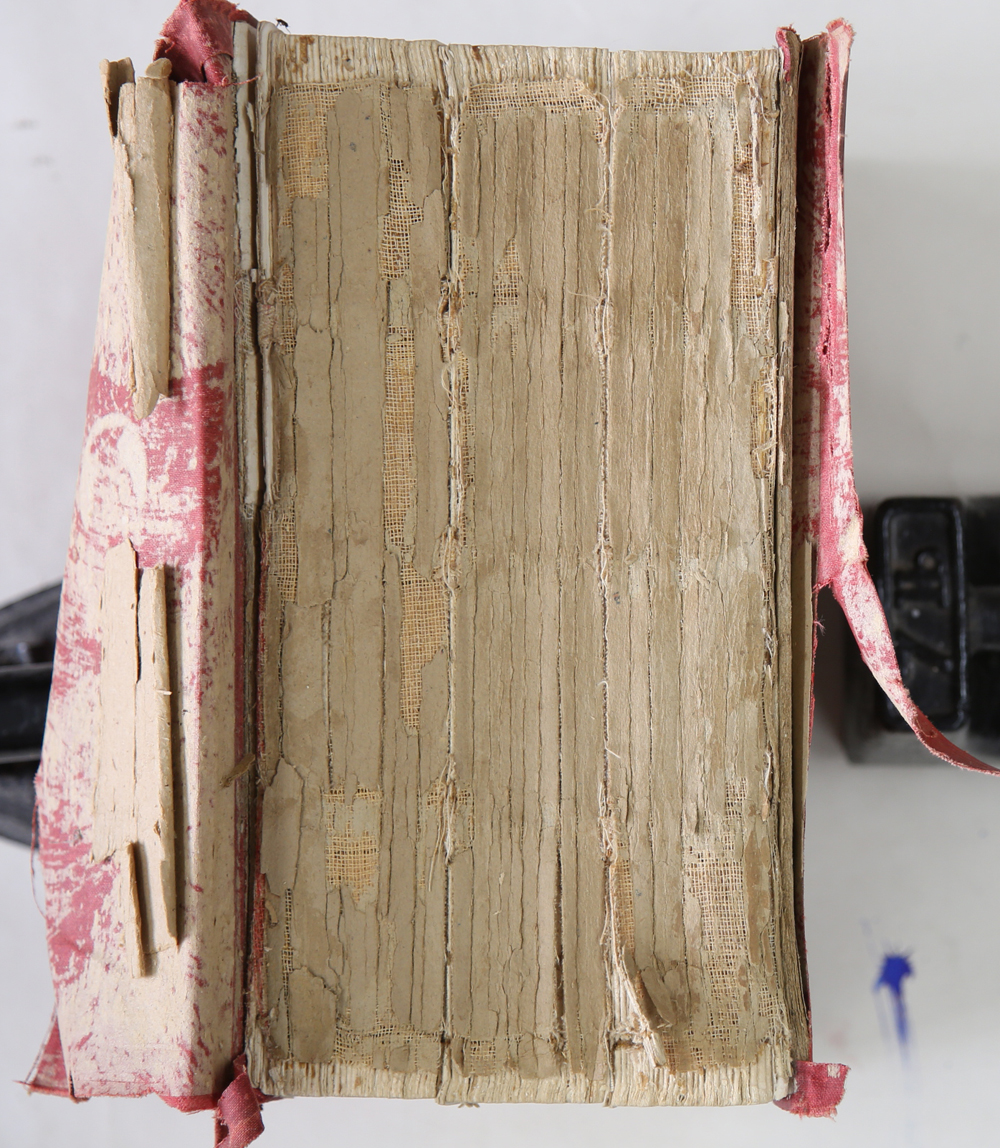