Greetings to  VBG Members. Maurice Betteridge passed away in may and I have just been notified by the family. Maurice was active in the Guild for a number of years, and was renowned in our circles for his Bible Collection and restoration work. Attached is  a brief Biography sent to me by his daughter, written by  Rhys Bezzant and other testimonials. 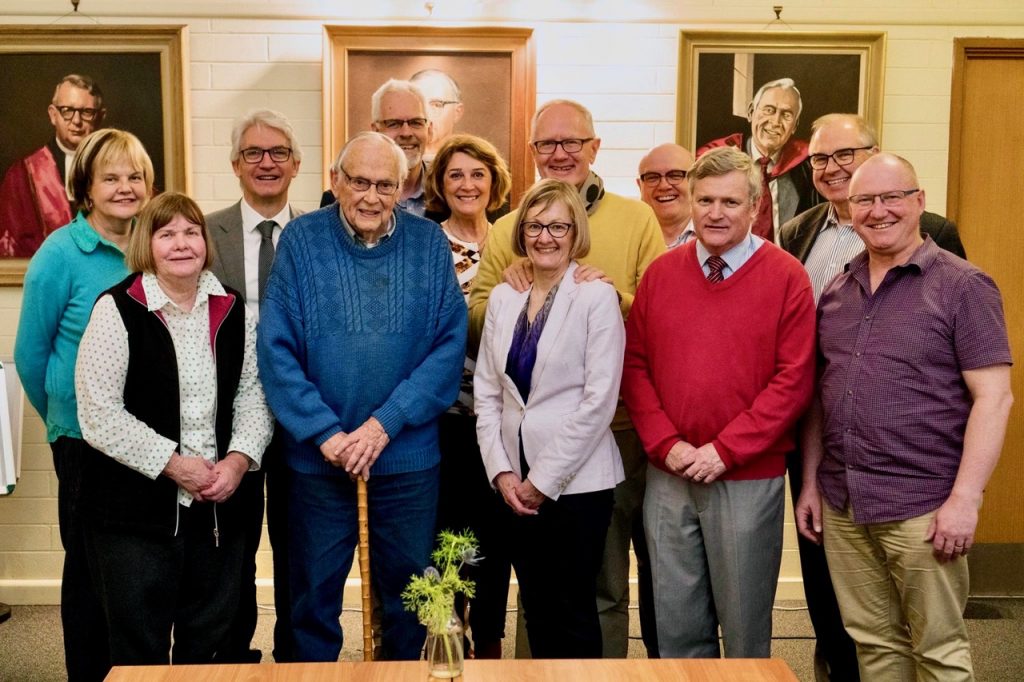 Maurice in the centre, wearing a blue sweater, at a Ridley Reunion in 2017. Note the portrait on the right of the shot showing him as a younger man.

Maurice Stanley Betteridge (1927-2020) was the seventh Principal of Ridley College, following the tenure of Leon Morris. He brought to the position broad experience of the worldwide church, keen academic interest in church history (especially the Reformation), a heart for evangelistic preaching, and experience of leadership in ministry contexts. But perhaps he is remembered best of all for his gentle wit and kind pastoral ways. He and his wife Jacqueline, who predeceased him, invited many students into their home and made the Ridley community a more collaborative environment for study and work. His death this week will be grieved by many Christian leaders in different parts of the globe.

Maurice was a New Zealander, the second to be appointed as Principal of Ridley with Stuart Barton Babbage the first. Maurice’s links with the College were built early, as he was ordained in 1951/1952 in the Diocese of Nelson by Bishop P.W. Stephenson, who was Ridley’s first graduate in 1914! It is remarkable that Maurice’s connection to the College went right back to its founding. Long before arriving to work in Melbourne, he had stayed at Ridley when invited to be the speaker at a mission held by the Melbourne University Evangelical Union in the early 1960s. He had studied at the General Theological Seminary in New York City, served as Chaplain to the University of New England, and based in Sydney was General Secretary of the Church Missionary Society from 1973-1978. In these diverse locations, Maurice developed insights into the complexities of evangelical ministry, but always affirmed his confidence in the Gospel of the Kingdom. He was not afraid to highlight the weaknesses of Christians past: once when I gave a lecture on Nicholas Ridley to mark the 450th anniversary of his martyrdom in 2005, Maurice pointed out to me that I had failed to note Ridley’s cantankerous character!

As Principal of Ridley (1979-1992), which at that stage incorporated both a theological college and a residential college of the University of Melbourne, Maurice brought energy and resolve. Finally, a fit-to-purpose library was completed in 1984, with new lecture rooms beneath, a bookshop was opened, a new degree in theology was launched, certificate level courses were offered in suburban locations, and the faculty tripled in size. While Leon Morris’s leadership had taken as its template a vicar with his curates (namely the faculty!), Maurice saw himself as first among equals and cultivated an esprit de corps which suited the mood of the times. The 1980s were days when the entrepreneurial spirit captured the international moment, so Ridley began several new programs to win new enrolments. Intentional youth ministry training was initiated, and study tours to the Middle East were introduced. Different overseas speakers were invited to lecture at the College, for example, Dick Lucas from St Helen’s Bishopsgate and Alister McGrath from Wycliffe Hall, Oxford. Maurice supported women called to the ordained ministry of the church, first to the diaconate in 1986 and to the priesthood in 1992.

Many still speak fondly of Maurice’s lectures in Reformation history and especially remember him using an overhead projector to illustrate a theological point by means of woodcuts. His hobby was to bind books, many of which will make their way to the Gravitas Room for display in our refurbished library. He grew tired towards the end of his time as Principal but still managed for some years after retirement to serve at St James’ Ivanhoe and to lecture in Reformation History at the Presbyterian Theological College in Melbourne. His last visit to Ridley was a happy time of sharing stories over lunch with former students. We brought him into the Dining Room to introduce him to a new generation of students, and he received a warm ovation. His portrait, the first to be composed from a live sitting, has above his right ear a rectangular upright. Long have students wondered whether this represents an open window onto the world outside or the foot of the cross. Either works. Maurice was keenly aware of the responsibility of Christians to their community, and of our obedience motivated by Christ’s atoning death. We can be thankful as a College community for a life well lived and a servant now being welcomed home.
Words from Rhys Bezzant.

Some testimonials
‘Maurice is remembered as a kind, gentle and unpretentious man who was a clear preacher of God’s Word able to take deep theological principles and make them relevant to the ordinary lay person. He had a warm infectious smile and he and Jacqui had a great ministry of hospitality together. At the funeral, he was remembered as someone with a great intellect and yet a very practical man, with a love for golf, and of course, books. In the last days, I remember well simply visiting him, reading the Bible with him, and then discussing the passage before we prayed together.’ – Stephen May (Vicar, St James’ Ivanhoe).

‘Maurice had a deep love for the Anglican Reformation, and exemplified the best of that tradition: a love for the Scriptures, trust in the Gospel of Christ and God’s grace, a respect for the past, and careful scholarship.’ – Peter Adam (former principal).

‘My favourite memory of Maurice was when Darren Waterworth, Business Manager at the time, returning from community lunch walked up to him not realising who he was, to ask whether he realised that he was on private property and shouldn’t be wandering around. Maurice then identified himself and his relationship with Ridley and returned to the office having a great chuckle about almost being ‘bounced off’ the property!’ – Katrine Bramley (Registrar).

‘As Principal, Maurice accepted the responsibilities involved, while treating staff as valued colleagues. I was there for all of his Ridley years, happy ones for me: in his first year, Maurice adapted my teaching timetable so that I could finish my doctoral thesis (which he bound beautifully), and continued to encourage my writing…I give thanks to God for Maurice Betteridge, for his gentle strength, wise insights, delight in the beauty of design, craft and people, and above all for the grace of Christ shown in his life and ministry.’ – Charles Sherlock (former faculty).

June 2020 From the Committee

Like many groups, we are on hold for the duration of the Covid 19  restrictions. For some it can be a distressing time, being in social isolation, especially if  you are not a great social media user. We hope you are able to keep connected, and yet at the same time keep separated to remain safe.

The committee here have been meeting on Zoom, ( wish I had bought shares in that company last January), and discussing what we might do as the situation changes. I had some plans to produce some around the bindery videos, only to discover the charger was missing from the video camera, and at present everyone is out of them. Still hoping to have one soon.

We have named the challenge in honour of John Willis, who was a founder and long time member of the guild who died recently. He remembered the guild with a bequest, and the guild set up a display of some of his beautifully made books at the Royal Show last year.  Follow the Link  A Tribute to John Willis Rasv Display

The challenge book this year is a small single-section book by Robert Mclaren called With Apologies to Woolnough, about his adventures in marbling,his  single section booklet  was produced by David Harris in 1984  with Linocuts and hand typeset in his private press.  Each copy includes a marbled paper cover plus a marbled title slip, and an interesting device of a sheet of marbled paper, different for each copy,  cleverly held in by linocut printed hands.    A short read will stimulate lots of ideas for creative bindings. We haven't yet decided on the prize yet, but in past years we have had  about $150.00 of prizes. This year we will be charging for the print, rather than expecting you all to go find a set text. It may be hard for some to do so.

So we will purchase the copies (very limited numbers)  post out the copies to you  for $20.00.

Send me an email,  president @vbg.net.au with your details, and we will reserve a copy and forward the payment details to you.

which has been delayed due to the restrictions. We are planning to have a Saturday meeting in November, featuring the Challenge, the AGM, Buy Swap and Sell, and a Barbeque. We are also hoping we can have an interesting demonstration of some bookbinding technique, or two on the same day. A packed full day hoping to make up for the missed meetings caused by the very necessary social restrictions.

If you are like me, there has been time to do a big cleanout of the bindery, rearrange the layout, and actually get through some of the half finished projects. Its amazing how all the best intentions seem to keep putting off important projects.  I noticed the flouros had faded a number of hand artworks, so  put in new led  panel lights. Its a good thing they have been replaced before the artworks disappeared all together.

Follow on the link to a few other projects I have been able to do while locked down, and a few of the things I learned while at them.

I will add a few more projects here soon.

We still have a variety of materials for sale, and usually offer them at the Guild Meetings. We will offer them at the November meeting, but if you are desperate you can send me an email and I can let you know what is available. Maybe also I will get to a decent listing soon.

Our best wishes from the committee, and don't hesitate to send your enquiries to us.

Best regards on behalf of the committee,